Little Hinton – The History of St Swithun’s by Paul Williams

A History of the County of Wiltshire: Volume 12, Ramsbury and Selkley Hundreds; the Borough of Marlborough Bishopstone Pages

Bishopstone: a Saxon name simply meaning the farm (tun) of the bishops.  Archaeological evidence has shown that settlement, within the village, extends back to the 6th or 7th century. However, in this pre-1946 parish, 10,000 years of occupation is evident from findings of Mesolithic and Neolithic flint tools, a Bronze Age barrow and Iron Age settlement, to two Roman villas.

It was, for many years, part of the Ramsbury Hundred.  A hundred is a division of land that appears to have been introduced in the 10th century. The first written record is in 1208 [i]

Taxation returns suggest that Bishopstone was fairly prosperous until the 16th century, but then it apparently fell into decline.

During the 18th century the village began to spread south of the road and the number of farms reduced, while those that remained grew bigger. In 1784, the then parish measured 3,520 acres, of which 1,725 were arable, 700 meadow and lowland pasture, and 800 upland pasture and downland. By the 19th century most of the land had become concentrated into a few large farms. By the Second World War, only three of these remained – Manor, Prebendal and Eastbrook.

Distinctive features of the landscape are the strip-lynchets in the coomb south of the village.  These are a series of steep terraced surfaces called shepherd’s steps that probably evolved when medieval villagers needed to increase the amount of arable land available.

St Mary’s Church dates back to the 12th century. A manor house was demolished in the 19th century. The mill, opposite the mill pond, was re-built in 1818. In Villages of the White Horse (1913), the fine Wiltshire writer Alfred Williamsrated Bishopstone the prettiest of all the down-side, taken all round.  H.W. Timperley wrote that Constructed from a variety of local materials, it snuggled into the downs as if it had grown there rather than been built.

Further information on the village can be obtained in: An Introduction to the History of Bishopstone by GI Parker; The Sparrow Hunters and Just for a Lark by RH Wilson, each priced £5.00 plus P & P – mogsboon@hotmail.com

Hinton Parva: was another of the spring-line Saxon settlements, Hinton meaning the farm of the monks. The parish was recorded in a Saxon charter purported to date back to 854[ii]. Like Bishopstone, archaeological evidence dates back into prehistory. There were at least two Roman settlements, and a Saxon village around the church.

St. Swithun’s Church probably dates back to the early 11th century. For more information see The History of the Church of St. Swithun’s, Little Hinton, by Paul Williams (published 2012) which is available at Swindon Reference Library.

It is said that three mills existed[iii]. One, Berry Mill, is known to have been just south of Hinton Marsh Farm and was in use until the early 20th century; its demise was recorded by Alfred Williams also in Villages of the White Horse(1913). Another, mill just to the north of the manor, could well have been in existence in Saxon times as its land is respected by the old parish boundary.

During WWI Russley Park was home to one of the few female run remount depots. 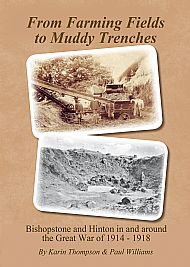 This fully illustrated book provides a comprehensive review of military life as experienced by those men of Bishopstone and Hinton who from the 17th century until the early 20th century were prepared to serve their country by enlisting in the army or navy. Most did so voluntarily, but in some instances they served under compulsion.

The biographical accounts of individuals are set in the context of village life. Additional chapters are provided to showing what life was like in the villages before and after “The Great War” and how parishioners went about supporting the military.

The book is well illustrated throughout, with many images taken during the first 30 years of the twentieth century, giving the reader a glimpse of life as it was during those times.

The history of the parish is a fascinating topic, if you can add to this list please contact us

We use cookies on our website to give you the most relevant experience by remembering your preferences and repeat visits. By clicking “Accept All”, you consent to the use of ALL the cookies. However, you may visit "Cookie Settings" to provide a controlled consent.
Cookie SettingsAccept All
Manage consent

This website uses cookies to improve your experience while you navigate through the website. Out of these, the cookies that are categorized as necessary are stored on your browser as they are essential for the working of basic functionalities of the website. We also use third-party cookies that help us analyze and understand how you use this website. These cookies will be stored in your browser only with your consent. You also have the option to opt-out of these cookies. But opting out of some of these cookies may affect your browsing experience.
Necessary Always Enabled
Necessary cookies are absolutely essential for the website to function properly. These cookies ensure basic functionalities and security features of the website, anonymously.
Functional
Functional cookies help to perform certain functionalities like sharing the content of the website on social media platforms, collect feedbacks, and other third-party features.
Performance
Performance cookies are used to understand and analyze the key performance indexes of the website which helps in delivering a better user experience for the visitors.
Analytics
Analytical cookies are used to understand how visitors interact with the website. These cookies help provide information on metrics the number of visitors, bounce rate, traffic source, etc.
Advertisement
Advertisement cookies are used to provide visitors with relevant ads and marketing campaigns. These cookies track visitors across websites and collect information to provide customized ads.
Others
Other uncategorized cookies are those that are being analyzed and have not been classified into a category as yet.
SAVE & ACCEPT